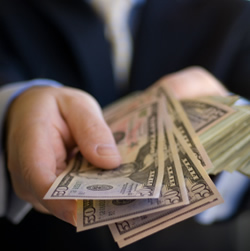 These loans are shedding their negative reputation

Hard money loans, which got an unsavory reputation during the housing crisis, are being rehabbed for buyers of high-end fixer-uppers.

A hard money loan differs from a mortgage in that the loan amount is based on the anticipated sales price of the home after improvement costs. Terms are short (typically just 12 months), interest rates are much higher and the loan is backed only by the hard asset, the residential property. Borrowers of these loans avoid a stringent assessment of their credit scores, income and debt-to-income ratios.

During the mortgage crisis, hard money loans were most known for their association with low-end home-flippers profiting off cheap foreclosures, cosmetic improvements and fast turnarounds, as well as some small lenders who targeted borrowers rejected by conventional lenders. Now hard money lending firms and funds are increasingly financing higher-end investors who are eyeing the recovering luxury home market.

“Flippers who can are moving to the high-end because distressed property values have not risen as quickly on the high-end, so margins are bigger,” says Daren Blomquist, vice president at market researcher RealtyTrac. Overall house-flipping, defined as homes bought and sold within 12 months, fell year over year, but flips with a resale price of $750,000 or more rose 21% in the second quarter of 2014, according to RealtyTrac.

More important, high-end flippers are averaging a 41% return on investment (ROI) for homes priced $750,000 to $1 million, and a 35% ROI for homes priced in the $1 to $2 million range, according to RealtyTrac. In comparison, flipping a home priced between $200,000 to $300,000 generated a 22% return, the data shows. Of buyers who resold homes at prices ranging from $750,000 to $5 million, 51% made their initial purchase with cash, suggesting that nearly half are using some kind of financing, Mr. Blomquist says. However, less than 2% of overall home loans are backed with hard money, according to Inside Mortgage Finance.

In July 2013, Atlanta-based hard money lender Lima One Capital started to see a “real uptick in large loans” for rehabs on luxury homes, says President John S. Warren, who launched Lima One in 2011 and is now lending in nine states and the District of Columbia.

Other hard money lenders also are seeing a boom for bigger loans. In early September, for example, Asset Based Lending closed on a $1 million loan for a townhouse rehab project in Harlem, says Daniel Leyden, co-managing partner of the Hoboken, N.J.-based firm which serves borrowers in New York, New Jersey, southern Connecticut and eastern Pennsylvania. He says the firm’s fund has financed over 300 hard money loans totaling more than $40 million in the past three years.

Without hard lending, 42-year-old Washington, D.C.-based investor Carlos Perez and his son Carlos Perez, Jr., say they could never have bought their first luxury investment property, a split-level purchased for $800,000 in the affluent Buckhead neighborhood of Atlanta last fall. Quick underwriting allowed the pair to compete with cash buyers for a property where speed was crucial, Mr. Perez says. “The people selling did not want to wait to move,” Mr. Perez says. “I actually closed in less than 15 days.”

The Perezs’ $1.1 million loan from Lima One included costs to open up the floor plan, install high-end appliances and luxury finishes, and upgrade to new electrical, plumbing and mechanical systems. Father and son plan to list the house for $1.5 million in October.

Here are a few more considerations investors, and even high-end home buyers, may want to keep in mind about hard money loans:

Points and fine print. Some lenders require the borrower to prepay rate points and/or add “junk fees” such as underwriting, processing or lockbox fees at closing.

Renovate, then refinance. Home flippers are the main market, but Austin, Tex.-based lender Pride of Austin Capital Partners says it is receiving some referrals from mortgage brokers and banks for home buyers of fixer-uppers who have trouble qualifying for a sufficient loan amount to cover improvement expenses, says Managing Member David Owen. Once improvements are completed, the appraised value may be higher, allowing the borrower to refinance to a mortgage, he adds.

BACK TO NEWS
617.971.9700
It is the quality of
lending over the
quantity of lending.
–Lewis Thompson Preston
Know what you own,
and know why you own it.
–Peter Lynch
If you count all your assets you always
show a profit.
–Wilson Mizner
If one considered life as a simple loan, one would
perhaps be less exacting.
–Eugene Delacroix
Money is only a tool. It will take you wherever you wish, but it will not
replace you as the driver.
–Ayn Rand